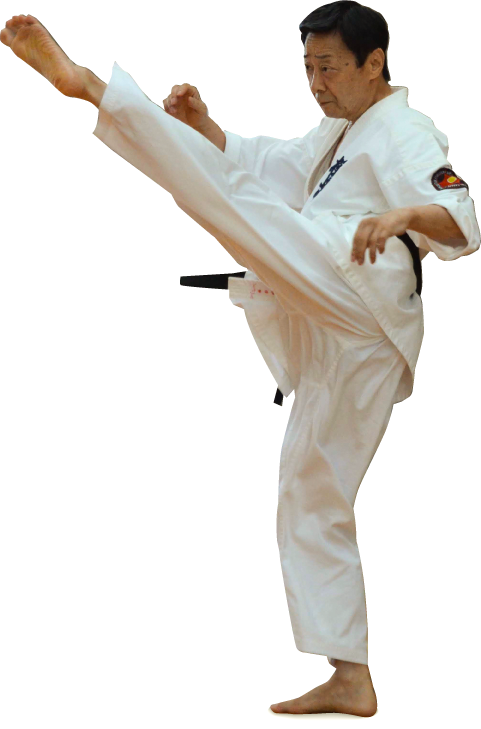 The History of the IKO Kyokushinkaikan is the History of its Founder, Mas Oyama.
Born in 1923, he began Kempo at an early age, then commenced karate with Shotokan Karate founder, Funakoshi Gichin. Then trained in Goju-ryu karate and various other martial arts. In 1947 he won the karate division of first All Japan Martial Arts Tournament in after WWII.
He is also famous for long periods of isolated training at Mt. Minobu and Mt. Kiyosumi as part of his resolve to devote his entire life in karate.
Battled bulls, cut bottles in half with shuto, became known as “Godhand” for his feats of power.
1952, he went to the USA to introduce his karate and challenge top professional wrestlers and others fighters.
At different times he travelled throughout the world experiencing other martial arts and introducing karate.
He firmly believed karate was the strongest fighting art. Opened his first dojo in May 1954, promoting full contact fighting. In 1963, created the IKO Kyokushin Shogakkai (Scholarship Foundation) Kyokushinkaikan, This is the birth of the worldwide Kyokushin Karate.
At that time all karate training was based on “sun-dome” non-contact rules where actually striking or kicking the opponent in competition was prohibited .
Oyama said, “Unless I actually hit the opponent there is no way to know if my attacks are truly effective.”
In 1969, the First All Japan Open Tournament was held, the first full contact tournament under knockdown rules.
Kickboxers and fighters from various styles competed but all top places were filled by Kyokushin fighters.
In 1971, the manga based on Mas Oyama and Kyokushin called “Karate Baka Ichidai” was released. Created a boom for Kyokushin .
All-Japan and World Championship tournaments followed, all meeting with tremendous success.
As a result, over 350 dojos in Japan and branch dojos in more than 120 countries around the world. In all there have been over 12 million Kyokushin students worldwide.